I have been to The North.

A ways north, in any case. Last week I appeared at Wordpool, the energetic and thoroughly enjoyable writing festival in Blackpool. Here are a few photos.

Blackpool is a summer beach resort on the Irish Sea. Wordpool takes place in November. So the town was quiet. But the views of the sea were spectacular — silvery, slick and flat, almost like mercury poured out on a sheet of glass. And I grew up near the beach in southern California, so waking up to the sound of waves breaking on the beach really made me feel at home. 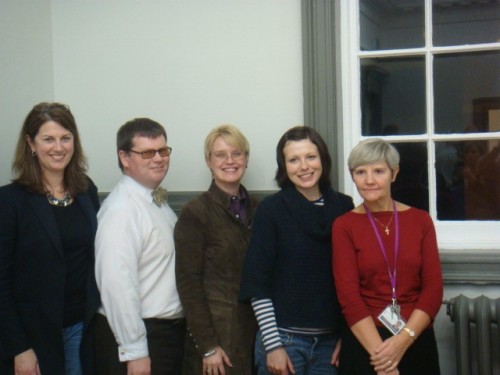 Blackpool has a history of cabaret and club entertainment. (The Beatles played Blackpool in the early 60s.) The hotel where the Husband and I stayed boasted LIVE ENTERTAINMENT EVERY NIGHT. As it has for at least a hundred years. Photos of performers bedeck the halls. 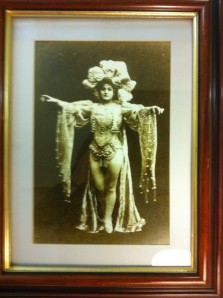 And the night we stayed there, a trio of slinky young ladies was performing hits from Chicago. They were good. They were hot. The Husband and I couldn’t get through the door to the cabaret, because it was blocked by shopmobility scooters. We were the youngest guests at the hotel by thirty years. And all the other guests were wonderful — cheery, friendly, laughing, having a great time. In fact, everybody in Blackpool was open and welcoming and full of good humor.

We had a great time. Which made the hotel’s idiosyncrasies endearing. Such as the fact that it had no towels. And no phone in the room. And that when we checked in we were handed an instruction sheet that said: “Your key is blue. This means your breakfast time is 7:45 a.m.” (Us and 100 other guests. In the morning we had to line up outside the restaurant and have our keys checked, like we were boarding a Ryanair flight.) And that the hotel turned off the heat and hot water overnight. When they turned the boilers on again at 5:30 a.m., the walls and ceiling and floors crackled and groaned and shrieked. It was marvelous. Like being in The Shining.

The Husband said, “You’d think a hotel that includes the word ‘Grand’ in its advertising would be…” I said, “What, grand?” I pointed at the hotel’s notice board. Tacked front and center was a poster advertising a rival hotel up the road. That should have been our first clue. But in the end all was well. The Husband got to experience time travel to the 1950s.

I must also thank David Riley, better known around this blog as Gnomefinger, who encouraged Wordpool to invite me to speak, and helped promote the event. It was great to meet him at last.

And on the way home we finally made the pilgrimage. The one Paul has wanted to make since he was a kid and first heard the opening chord of “A Hard Day’s Night.” We went to Liverpool. 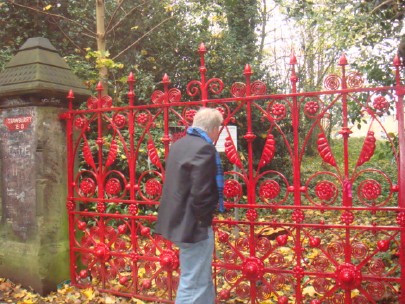 We spent several hours following the Beatles trail. I posted a Penny Lane photo a couple of days ago (and the barbershop is still there on the corner — its motto is “Above us only hair.” Really.) Above is Paul at Strawberry Fields. 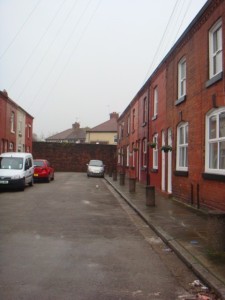 Here’s the street where George Harrison grew up. His house is in the row on the right. It was extremely basic: two up, two down — and no indoor plumbing.

The day finished with a descent into the Cavern. 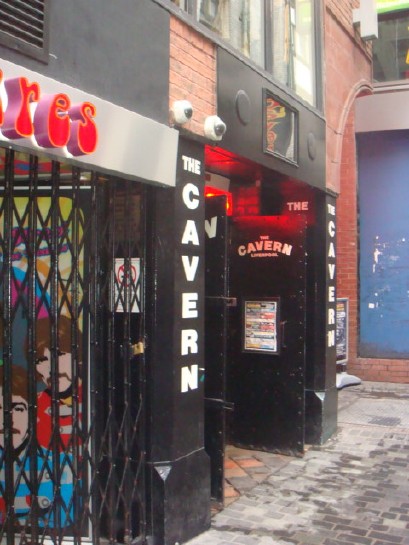 And that’s the last place I saw the Husband. He wended his way down, and down, the stairs — the club is about three floors below ground. What happened then I can’t be sure of. But I think he was raptured.

Quite a day in the life.