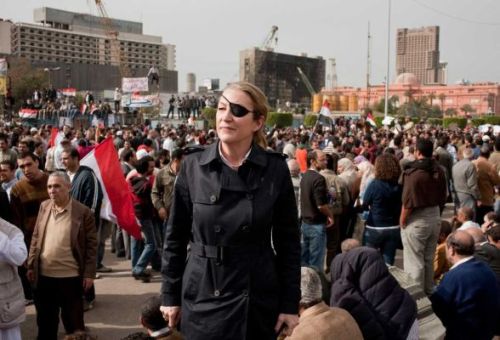 A couple of weeks ago, when I opened the London Sunday Times, I thought: the situation in Syria must be getting serious. Marie Colvin’s there.

Colvin, an American war correspondent for the Sunday Times, was an incredibly gutsy journalist and an unmissable writer: vivid, tart, and unflinching. Anybody who read her work, or saw her on CNN in the last decade, recognized her as the reporter with the eye patch. As the AP explains:

She lost the sight in one eye during an ambush in Sri Lanka in 2001 — but promised not to “hang up my flak jacket,” and kept reporting on the world’s most troubled places.

“So, was I stupid? Stupid I would feel writing a column about the dinner party I went to last night,” she wrote in the Sunday Times after the attack. “Equally, I’d rather be in that middle ground between a desk job and getting shot, no offense to desk jobs.

“For my part, the next war I cover, I’ll be more awed than ever by the quiet bravery of civilians who endure far more than I ever will. They must stay where they are; I can come home to London.”

Now she’ll be coming home for good. She was killed this morning in Homs, along with photojournalist Remi Orchlik. It’s crushing news.

Many tributes are calling her fearless. But I think she was something even braver than that: undaunted. She had been wounded under fire and nevertheless went back to the work. That’s courage.

As a writer of fiction, sometimes I think publishing is a tough business. Then I think of Marie Colvin and remember what real toughness is. If you pray, say one for her, and for all the other reporters risking themselves to tell the truth to the world.