From the earliest days of Lying for a Living, Susan Daly has been a loyal reader and wonderful commenter. She’s the person who inadvertently created the blog’s Grammar Geeks Unit. And she won my first ever contest, by coming up with my favorite verb name. 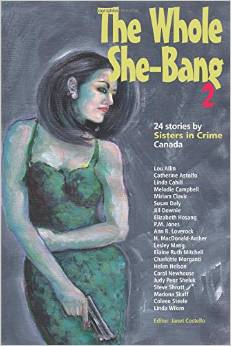 Susan has been writing for a while, and now she has joined the ranks of published mystery authors. She has a short story in The Whole She-bang 2, an anthology of stories published by Sisters in Crime Canada.

From the book’s page on Amazon.com:

This is the second collection of mystery stories by Canadian members of Sisters in Crime… The stories have a variety of characters: shop owners, children, a thief, vengeful women, unhappy wives, a poet, police officers of both sexes and more… The stories are set mostly in Canada, in a wide variety of locations, including British Columbia, Northern Ontario, Alberta and Quebec!

Like Loading...
This entry was posted in Books and tagged Books, Crime Fiction, Mysteries. Bookmark the permalink.