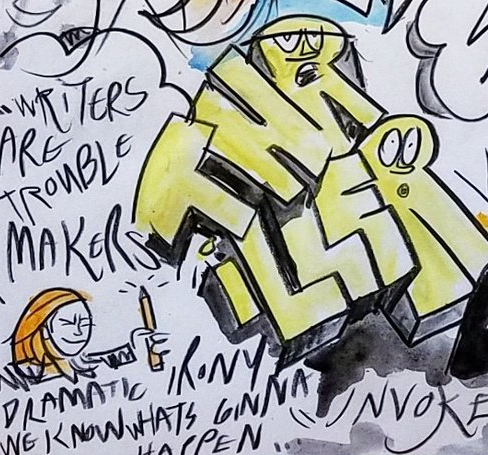 Today I’m re-posting more of the Q&A with my students in this year’s ITW Online Thriller School.

1. I wonder if you have a sense of Beginning/Middle/End markers in your books and the relative proportions given to each?

Beginning/middle/end: There are no hard and fast rules for when one of these turns into the next. But if you consider them the first, second, and third acts in a drama, you probably won’t go wrong by thinking in terms of the beginning as first quarter of the book, the middle as the next two quarters, and the end as the final quarter. Your mileage will vary according to the needs of the story.

2. Although a 200 page Middle has many scenes, do you think a small number of locations is okay? David Corbett says that tension, not action, keeps readers reading, and through the earlier scenes of my Middle the hero is in one place, ‘safe’ from immediate danger, gathering information, but with a sense of a ‘gathering storm’ beyond.

A small number of locations can work perfectly well if the suspense and level of conflict continues to build. That’s the whole idea behind the “crucible” of the story — the characters are in some sort of cauldron that limits their ability to escape the conflict. Limiting the setting can accomplish that.

3. And what do you think tension actually is? Is it different to suspense? Lee Child says suspense arises from unanswered questions. Is tension similarly about questions? Is it about danger? About twists and turns? About peaks and troughs, the rollercoaster? And is conflict different to tension, conflict really about the opposing forces in the crucible?

Tension is distinct from suspense. Tension means to draw something tight or put it under strain. For thriller-writing purposes, consider tension equal to excitement. It comes in brief bursts. Danger, confrontation, friction; time running out; deadlines approaching. Suspense can be sustained over an entire novel. Tension is felt in seconds or minutes.

4. You talked about ending chapters with questions. You didn’t mention ‘cliff-hangers’. I’m thinking that questions and cliff-hangers may be a bit like tension and action. Lots of questions good. Too many cliff-hangers not so good!?

Use cliffhangers whenever, wherever, and however you can. Always end a chapter on some kind of cliffhanger. Just remember, they can be emotional as well as physical.

5. You talked about the antagonist thwarting the protagonist’s desire. Do you think sometimes the protagonist’s desire is simply to stop the villain, a desire that didn’t exist until the villain appeared? You also mentioned the cliché of a hero’s family being threatened, but in many thrillers the hero must rescue those close to him. Do you think sometimes cliché vs not cliché is a fine line?

6. I’d wondered about plot and story and concluded that plot was ‘contrived’ by the author, while story was driven by the characters… and the more you let the characters do what they do rather than try to control them the better. I’d almost decided plot was a negative thing! Your podcast helped me realize that plot and character together make a story. And perhaps plot is in every thriller, but it’s the degree of ‘plotting’ that varies from author to author? I wonder if you draw a distinction between plot and story?

Plot is the series of events the author chooses to portray on the page to tell the story.

What you’ve clarified is that plot is the series of events or storyline, connected by causality, used to tell the story. And that plot develops from what the characters do, so in effect they create the causality, they do drive the plot, so as you say plot and character are two sides of the same coin. I hope that’s a fair understanding? And I think you’re saying it’s ALL story (what has happened), and plot is what we use to tell it (how it happens, whether or not we devise that plot beforehand or it develops as we write)?

Stories are metaphors for life. In stories, we recognize ourselves — our struggles, our striving, our quests. As a writer, when you create fiction, you’re designing how you’ll present your story to readers. That’s plot.

And you’re right: Don’t overthink it. Know that there are classic, archetypal ways to tell stories, and figure out if the tale you’re writing fits with any of them. But don’t tie yourself in knots. Plot is what the characters do, and how you choose to depict their journey on the page. Some writers create a detailed itinerary ahead of time; others have a sense of where they want to go, and strike out, breaking trail. You need to know what works best for you.

And always enjoy the trip.

Like Loading...
This entry was posted in Writing and tagged Creative Writing, Thrillers, Writing. Bookmark the permalink.

2 responses to “Questions about writing: Beginnings, middles, ends… and tension”