How do authors get readers to cheer for the bad guy?

I was searching the blog archives this morning and found a comment on a post from waaaay back that I never answered. The post is “My Breaking Bad injury, or why good writing is dangerous.” The comment is from loyal blog reader Dana Jean:

Walt is a bad guy. He did wrong things for the right reasons — at first. And even when he continues to do very bad things, I see his reasoning behind it. I supported Dexter too.

How are these authors making me cheer for the bad guy?

How indeed? What tricksy methods to writers use to get viewers, and readers, to cheer for villains and anti-heroes? Here are some reasons why we cheer for the bad guys:

They’re well-rounded. We see the entirety of their lives. And we see their lives from a compassionate perspective. Walter White starts from the most sympathetic position possible. He’s a brilliant, dedicated teacher, whose knowledge and passion for science are ignored by his students. To pay the bills, he has to work a humiliating second job at a car wash. He’s a devoted husband to his pregnant wife and father to his teenage son, who has a disability. And then he learns he has terminal cancer.

They have laudable motivations. Walter White starts cooking meth to provide for his family after he’s gone. He knows it’s illegal. It’s not a good thing to do. It puts him in danger. But time is running out, and he’s desperate. And the fact that he does something so dangerous actually makes Walt more sympathetic, at least at first.

They’re powerful. We like to read about (or watch) powerful people. We admire their power. We treat it — and them — with respect. Power helps them get things done. Think of The Godfather. Don Corleone is a mobster, but he can make miracles happen (it seems) for the helpless people who petition him for aid. In Breaking Bad, Walt starts out powerless, and we want him to gain agency, and respect, and independence, and revenge… and, yes, power.

Of course, power doesn’t solve Walt’s problems. By the time he says one of television’s all-time greatest lines to Skyler (“I am the one who knocks”), he’s far down the road to corruption. But we’re along for the ride with him.

The other guys are worse. Skillful writers make their bad guys look good by comparison. Who is Walter White up against? Tuco and Tio Salamanca. The cousins. Uncle Jack and his neo-Nazis. People who are remorseless and disgusting. Walt has to become tough to deal with them. We want to see him stand up and defeat these guys.

By comparison to Walt, Skyler can seem petty. Ungrateful, even. (Isn’t he doing all this for her?) She finds herself powerless, but the way she tries to strike back at Walt and get out from under the situation make us think poorly of her. (For example, at her wits’ end trying to get Walter to move out of the house, she sleeps with her boss, then tells Walt — in the kitchen at home, at dinnertime, as crudely as possible.) And, at heart, Walt is the anti-hero of the story. Skyler becomes an antagonist. She would stop him. And, thanks to the skill of the writers and Bryan Cranston’s brilliant portrayal, we don’t want that to happen.

Sorry it took me three-and-a-half years to answer your question, Dana Jean.

My life: texting with writers

What happens when a thriller writer texts with a close friend about exercise and home repairs? If the thriller writer is me, and the friend is another writer whose home has a concrete basement with a drain in the center of the floor, this. 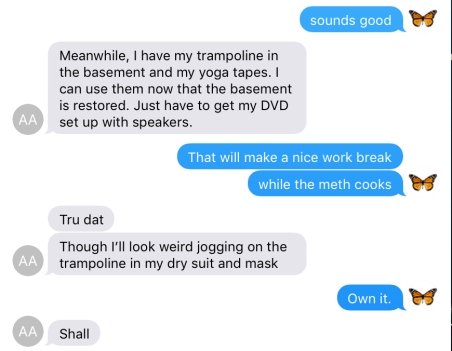 I love having buddies who speak my language.

And I presume that the relevant national security and law enforcement agencies are crawling through my friend’s neighborhood, searching for a basement window where Heisenberg is bouncing in and out of sight. 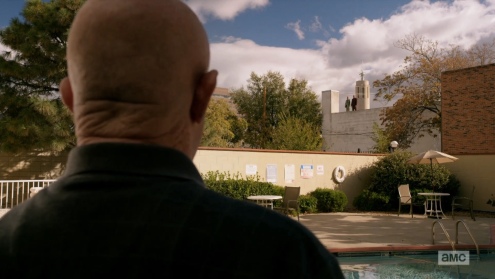 If you know me, you know I injured myself while watching Breaking Bad in a frenzy of suspense and anxiety. I love that show. I think it’s the best television series of all time. Even though it put me in the ER.

Now I’m watching Better Call Saul, the prequel centered on the sleazy, endearing attorney from Breaking Bad, Saul Goodman. Like BB, this show is a character study. It’s sharp and blazingly funny and occasionally heartbreaking. It has built its own world, which only occasionally crosses paths with characters from BB. So when it does, it jolts us. As in the image above.

Ex-cop Mike Ehrmentraut is being drawn into Albuquerque’s criminal underworld by doing occasional protection jobs for low level criminals. But he’s gotten in deep, and some very bad guys are putting pressure on him. He has resisted, but in this scene, he sees how badly he’s outflanked. He’s watching over his little granddaughter as she splashes in the pool. Then he looks up and sees two tiny figures on a distant rooftop.

Watching at home, all the hairs stood up on my head. Mike has never seen these two before, but the audience has. They’re the Cousins, hitmen who’ll shoot and kill twenty migrant workers in the back of a truck with the same dismissive ease with which they’d discard a gum wrapper. With their shaved heads, richly colored suits, their cowboy boots with silver skulls on the toes, they personify casual, hungry evil. We first see them in Breaking Bad, crawling on their bellies across a Mexican desert to the shrine of some dark, twisted saint, where they pray for divine help to kill Heisenberg.

When they appear — tiny, motionless, like toy plastic Army Men set on the roof — dread falls heavily over the scene. In the bright sunlight, positioned before the spire of Albuquerque’s Immaculate Conception Catholic Church, they’re like demons summoned from the Beyond.

That’s because this scene is an example of Dramatic Irony. In literary terms, dramatic irony occurs when the audience knows events before they happen. We know what awaits all these characters, years in the future. They don’t. Because of that, we watch — riveted — not because we’re curious about what’s going to happen, but in dread of the disaster that lies ahead, and with compassion for somebody who’s heading for a cliff.

The writers handle this brilliantly. This scene — minimalist and foreboding — weaves together plot threads that go back, and forward, for years. It amplifies and deepens them. If any of us can approach this level of impact with our own writing, we’ll be lucky.

When this image appeared on my TV screen, I shouted, “Oh, my God.” But this time I didn’t wave my hands wildly and stab myself in the eye. I know what’s coming. I can wait.

Christmas with my family

The Husband, reading tag on gift: “‘From a Family Man.'” (Opens gift.) “I get it!” Shows everybody his Heisenberg T-shirt.

Daughter: “What time are we watching Die Hard?”

My Breaking Bad injury, or why good writing is dangerous

The column I wrote yesterday for Dear Reader explains how, as a grown woman, I hurt myself playing kick the can. And a few years back, I broke my ankle at the gym when I fell off an elliptical trainer. Grace and coordination look at me from afar, and laugh.

But until Sunday night, I thought I would be safe sitting on my sofa watching television.

The Husband and I have been binge-watching Breaking Bad, the show about an Albuquerque chemistry teacher who, diagnosed with lung cancer, starts cooking methamphetamine to provide for his family after he dies. Yeah, that’s how it starts. But anybody who’s watched more than a few episodes knows that Walter White’s tale swells into a gut-twisting epic of Shakespearean proportions. Hell, last week’s episode was titled “Ozymandias,” after the poem by Percy Bysshe Shelley. That allusion is chillingly apt. (“…On the pedestal these words appear: ‘My name is Ozymandias, king of kings: Look on my works, ye Mighty, and despair!’ Nothing beside remains. Round the decay Of that colossal wreck, boundless and bare The lone and level sands stretch far away.”)

The show also features standoffs, murder plots, betrayals, explosions, poisonings, and occasional gunfire. It is, as they say, hella tense.

Yes, I scratched my cornea by gesticulating like a crazy person and screaming at my television: “Hank! Walt! Jesse! Look out!” And yes, explaining that to the emergency room nurse was embarrassing.

Here are words I never expected to hear about myself while waiting in an ER at 12:30 am: “Which room is the Breaking Bad woman?”

On the bright side: I got a tetanus booster. And if I promise to put socks on my hands while watching Breaking Bad from now on, they won’t make me wear a satellite cone around my neck.

The episode that caused me to suffer the self-inflicted TV injury was “To’hajiilee.” If you haven’t seen it yet, stick your hands in your pockets when you watch. If I can save just one person from jabby hand syndrome, it’ll be worth it.

As for any writers out there: Look on the works of Breaking Bad, ye authors, and aspire.